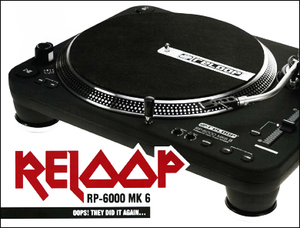 Within a few months, this is the second device by Reloop ready for testing that has landed on my desk. Testing the RMP-2 before this year’s music exhibition had been a rather spontaneous undertaking. At the end of March in Frankfurt, at the Reloop stand, I took a specific look at this device, instantaneously becoming fond of it. Although I am an advocate of the original, in terms of the Technics 1210, I am nevertheless always in search of qualified competitors that are commonly known as replicas, which by now they virtually are not anymore, as they have constantly been improved and are now advanced in different directions. That is what I was thinking when I received the 6000 MK6, Reloop’s new flagship and I wanted to approve my evaluation.

Properly and securely packaged, the content of the big cardboard box that reached the technical editorial office emerged. The single parts of the 6000 at first have to be assembled by the hobby technician, which admittedly turnes out to be foolproof. Initially the 11 kilos weighing casing has to be positioned with active force, now only the turntable and the balance weight for the anti-skating S-shaped tone arm with headshell have to be attached and screwed on respectively.

The turntable comes without a pick-up, but in return with a brightly shinig LED needle illumination which is plugged in an RCA jack and is freely exchangeable, a slipmat and a thick RCA cable without grounding cord. Without a pick-up, initially one feels a bit helpless as you can not put on a record right away. But realistically speaking, nobody would like to operate the MK6 with only a basic pick-up, instead you would prefer to get a premium pick-up.

The look of the Reloop is geared to the rubber-paint finish that is already familiar from the RMP-2. Hence Reloop’s stylish direction is clearly visible and optically convincing although the paintwork finish of the MK5 had already been quite smart. The shipped sample came in black but it is also available in resplendent white which almost necessitates sunglasses.

The 6000 MK6 operates on a quartz-driven upper-torque direct-drive basis which means it is directly driven with a magnet principle that is virtually indestructible as there is no connection between drive and turntable. Theoretically speaking, one could endlessly stop the MK6 with brute force without damaging the technology.

The developers of the Reloop turntable have not only taken into consideration straight club DJs but also all Hip Hop fanatics. For there are two start/stop buttons which also allow for a gyration of 90 degrees, enabling a vertical installation while still keeping the familiar start/stop section on the down left side.

Furthermore there is no necessity for any grounding which is a true advancement.. So now it is possible to connect the turntable without disadvantages to any line input without having to care about the annoying installation of the grounding.

Inevitably sooner or later every turntable in the world has to match with the Technics dinosaur, whether this is fair or not. The Reloop would not have to be in need of this in the first place, after all, it disposes of features that even a 1210 does not hold.

On the one hand there is the adjustable torque that is really lots of fun. It either allows the DJ to completely stop the turntable by slightly touching it which is really inappropriate in the club or when in the highest position the DJ can fully unload which in my opinion clearly exceeds even the Technics and any other turntable known to me with a similarly specified set value.

The starting and stopping speed can also be adjusted. With the turning knob which is directly allocated next to the torque controller you can choose whether you would like to start and stop respectively in only 0,2 seconds or if this should take up to 6 seconds. With the shortest alignment it is thus possible to drop on a beat on the spot and start it again. In this case practice makes perfect, just like the reverse button allocated directly to the right which also reacts very spontaneously.

In my opinion here lies the turntable’sonly weakness if you can even call it weakness at all. The manually driven needle hopping can not occur as carelessly as I would like to because in the area, where I personally always put the edge of my hand in order to subsequently move the tone arm with my fingers, the lastly mentioned features occupy the space which does not keep my playing comfort in good stead. All those of you who even use the tone arm lift or skip through a record without placing the hand on the turntable should please skip this paragraph. Maybe on the MK7 these features will be placed somewhere else.

The pitch range is adjustable in three scopes and is also completely disengageable at the push of a button. The available ranges are +/- 10, +/- 20 and +/- 50% - thus perfect for every scope of application, just like the speed ranges of 33, 45 and 78 RPM.

I have already held many types of the Reloop series in my hands and with every new model I have been more and more pleased with the increasing quality. The 6000 MK6 outranges everything hitherto existing and it sets standards at Reloop’s. The concept is well thought out, the drive mechanism is really strong, the finish looks precious and due to the omission of the grounding more connecting comfort and flexibility finds its way.

But one thing has to be clear. At a price of approximately 369,- EUR we are not talking about a turntable for beginners nor a replica anymore, we are talking about a luxury-class turntable and series-production flagship which justifies equipment, processing and performance. Just like some months ago, when I was convinced by the RMP-2 CD player, I have to end this with a varied Britney Spears quotation: Oops! They did it again…